Another successful Love UT Give UT day of giving 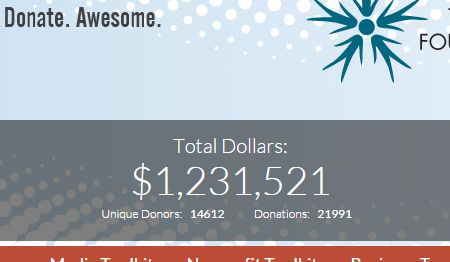 Thursday, March 26th, 2015: It wasn’t a holiday, school wasn’t out, people still got up, drove to work, and went about their day as usual.  From the outside it looked like any other regular, unassuming day.  Even though you couldn’t see it, something was different.

From the comfort of the couch, to the spare moment in the office, over 14,000 people were coming together to raise over $1.2 million dollars for local Utah charities.  With the almost 20 participating organizations that are located or serve down in our little Southern Utah corner of the state, we saw around 1,400 donations for a total of over $42,000. 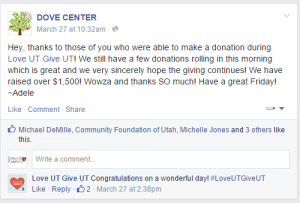 Some organizations got into it more than others, like the Dove Center that sent out several updates through social media before, during and after the event, and ended up having a very successful event raising over $1,500.  We were very surprised and appreciative when a couple days later we received in the mail a hand-written thank you note from them for our donation.

The biggest success for Southern Utah, though, would have to come from the Best Friends Animal Shelter over in Kanab, which raised almost $20,000 from donations and another $6,000 from awards.

Congratulations to all who participated and raised funds to help others in our community, and thank you to all who donated and made this day a great success.