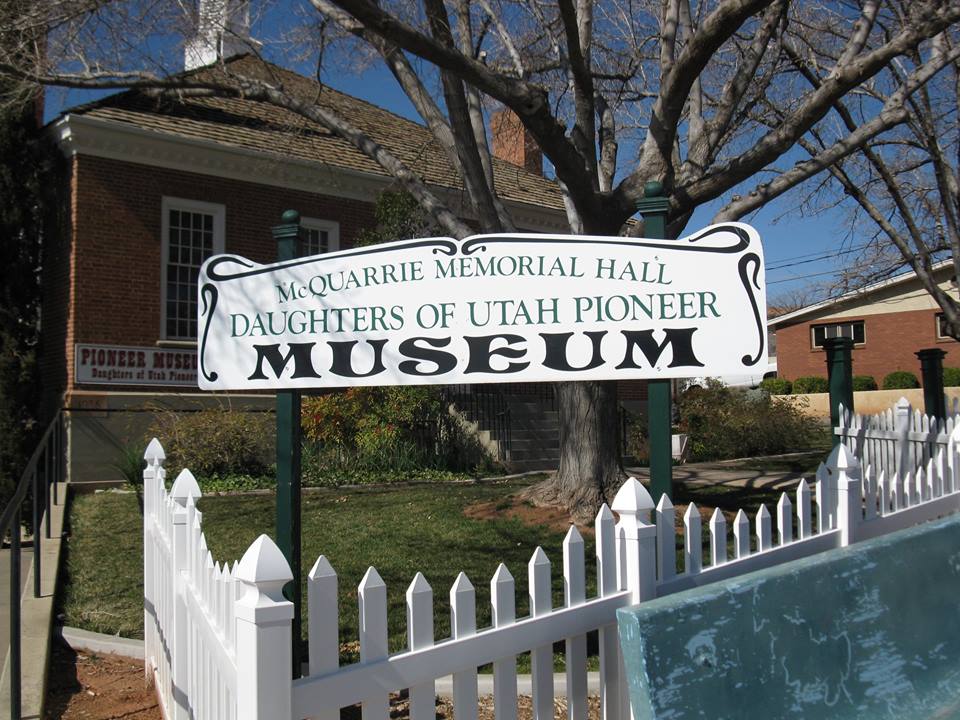 The objective of the organization of the Daughters of Utah Pioneers is to preserve our pioneer heritage and to honor the names and memories of those pioneers who came to Utah prior to May 10, 1869. This is the date when the two railroads, one from the East coast and one from the West coast, joined together in Utah.

We desire to educate our children and other descendants to appreciate their heritage and those who prepared the way for us.

The McQuarrie Memorial Museum is owned and operated by the three Daughters of Utah Pioneers (DUP) Companies in Washington County, Utah.  Approximately 200 women members volunteer their time to manage and maintain the facility and serve as Docents to visitors from around the world.

Through the generous donation of Hortense McQuarrie Odlum, the Museum was built in 1938 to house pioneer relics, photos and histories of those stalwart people who came to settle Southern Utah under the direction of Brigham Young beginning in mid-1850.  June 17, 1938, the day of the Museum's dedication, a day involving nearly all city and religious dignitaries, as well as most members of DUP in Washington County.  For the DUP to have its own building to preserve the precious remembrances of the early settlers was a dream come true.  Several full pages were published in the local newspaper heralding the event and thanking Hortense McQuarrie Odlum for donating the funds to have the Museum constructed.

Donations contributing to the large collection within the walls of the Museum came, and still come, from descendants of those pioneers who lived and worked in this harsh area.

Admission is free to the public.

Our hours of operation are: 10 AM to 5 PM daily except Wednesdays and Sundays.

Closed on Holidays and the month of December.