Kristen Ashley, New York Times bestselling novelist and fans at Rock Chick Nation awarded the Erin Kimball Foundation $6,790 from the proceeds of their t shirt fundraising drive.   Rock Chick members were encouraged to nominate their favorite charitable organization.  The Erin Kimball Foundation, a regional transitional housing program for families fleeing family violence, was randomly selected from the nominees and given the Rock Chick Reward for their work with “causes near and dear to the sisterhood.” 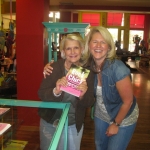 The Rock Chick Reward was totally unexpected and an incredible gift according to Sue Kimball, founder of the Erin Kimball Foundation.  “To know that the influence of our work has spread beyond the borders of Utah is pretty incredible,” shared Kimball.  “There are so many experiencing abuse across the globe, but there is also a groundswell of support from people like Kristen and the Rock Chicks  who are shifting lives to health and peace.”  For more information on services and ways to assist the organization go to www.erinkimball.org or call 435 627 9232.